By CONNOR BOYD FOR MAILONLINE

A parishioner shouted 'shame on you' as the Archbishop of Washington addressed the Catholic Church's child sex abuse scandal.

When Cardinal Donald Wuerl made his apology speech to the church on Sunday, Brian Garfield stood up and confronted him before storming out.

Another churchgoer turned her back on the clergyman in protest. Wuerl noted the interruption but continued with his speech.

Trump 'How can you impeach someone who's doing a gre… 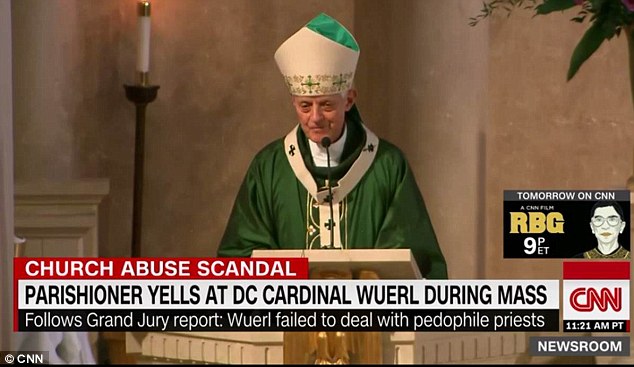 Wuerl faces accusations that he mishandled clergy sexual misconduct while he was a bishop in Pittsburgh.

He was addressing Washington's Annunciation Catholic Church when some of the crowd turned on him.

In a short speech after Mass, Wuerl asked for forgiveness for his 'error in judgement' and 'inaccuracies' from the 200 or so people in the church.

Wuerl also urged the parish to pray for and remain loyal to Pope Francis.

An 11-page text penned by Archbishop Carlo Maria Vigano, the Vatican's former ambassador to the US, claimed that Pope Francis knew about sex abuse allegations since 2013.

After the interruption Wuerl apologized for how the sex scandal was handled.

'Yes, my brothers and sisters, shame. I wish I could redo everything over these 30 years,' he said.

Afterward, Garfield told CNN: 'I don't think he is a monster but I wish he would talk less about defending himself and more about his failings.

'It's a little galling to be lectured on transparency by people who are lying to us. I wish he would talk to us as a pastor and not a politician.'

Wuerl was not accused of any misconduct, but it was his job to oversee the Pittsburgh diocese during the time several attacks happened.