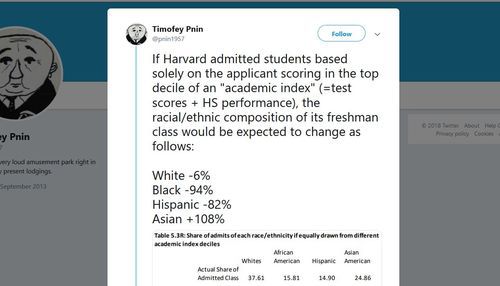 If Harvard Had Colorblind Admissions, Its Black Share Would Fall From 15.8% To 0.9%

Perhaps there is a ratchet effect in terms of black shares? At some point, Harvard’s endowment is doing well, so they spend a lot of money to boost their black share. But then Stanford gets a big windfall and ups the bidding war for black talent. And then Yale jumps in with massive money. Harvard should respond by letting its share of blacks fall, but that could lead to Bad Publicity, so it doubles down. And around and around, until blacks wind up absurdly over-represented at Harvard relative to their academic skills.

Looking at how Asians would be a majority at Harvard under a more objective system, current Harvard president Lawrence S. Bacow must now understand how Harvard president Abbott Lawrence Lowell felt in 1922 when he imposed a quota system to keep the then rising ethnicity’s share down.

The worry in both cases was that if they just let in the top students, Harvard, like Yogi Berra’s former favorite restaurant, would get so popular that nobody would want to go there anymore.

Professor Arcidiacono of the Duke Econ department is a hired gun expert witness for the plaintiffs in the Harvard discrimination case. He’s battling Harvard’s hired gun economics expert David Card. So, keep that in mind when evaluating their statements.

This offers an interesting riposte to the ACLU’s recent tweet:

Post
NYT: "Why White Supremacists Are Chugging Milk (And Why Geneticists Are Alarmed)"

Camp Of The Saints